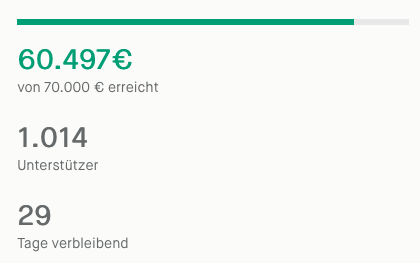 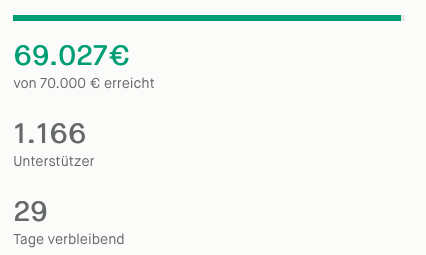 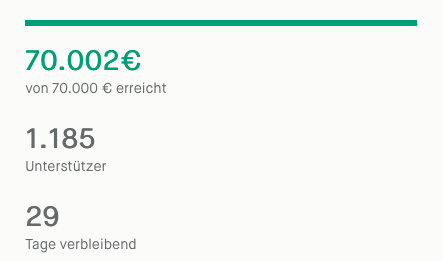 We are absolutely floored by the amount of support we’ve gotten in such a short space of time. We honestly did not expect to hit our goal in over 6 hours.

From the bottom of our hearts, thank you so very damn much to everyone who backed, shared or just came in to say something nice.

We already have stretch goals planned so we will be adding them very soon. We just want a moment to regroup and decide with our dev team which features they would love to try secure first as additional goals. So please do keep backing us and we’ll be back very soon with details.

We’re also going to look into making more of the limited backer tiers available again as a few people are asking. We just need to work this all out properly.

So thank you again for all of us here in Ukraine and those scattered around the EU. You’ve brought a massive amount of hope and smiles to us all. And if think you have any friends, family or foes who you think might enjoy a Holmes meets Cthulhu horror adventure, please do share our campaign with them. 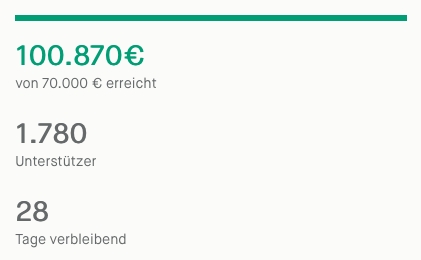 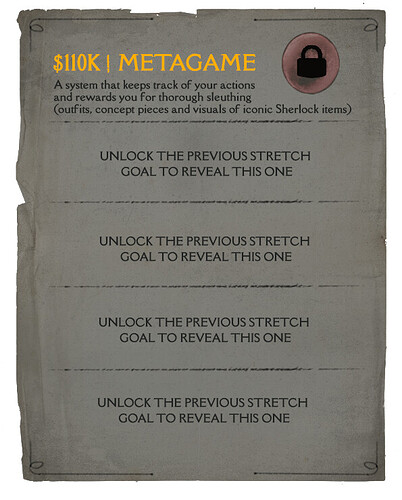 We are excited to reveal our first stretch goal for The Awakened, a feature we call internally “Metagame”. And the best thing is, we are just $10K away from unlocking it, thanks to your absolutely overwhelming support! 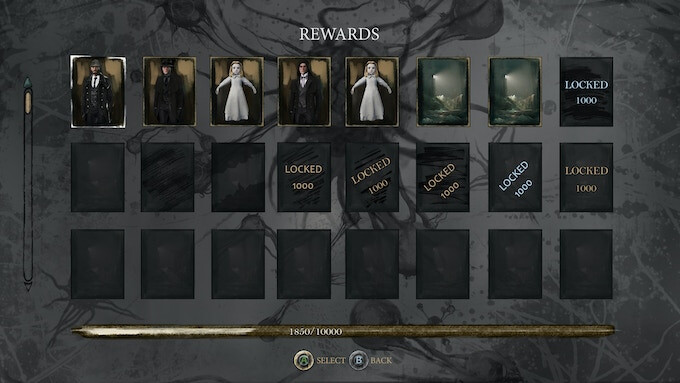 Metagame is a system that keeps track of your actions and lets you earn points to unlock various cool rewards: new outfits, concept pieces as well as lore items linked to H.P. Lovecraft and Sherlock Holmes. The latter include iconic collectibles such as the Necronomicon or Irene Adler’s portrait. You can view the unlockables in a special bonus menu. 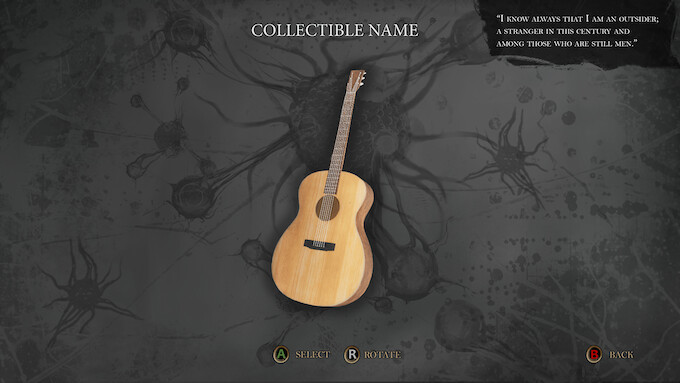 Points are awarded in the process of conducting investigations and completing the main and side cases. Thorough sleuths will earn more points and unlock more rewards than the incompetent ones!

If you don’t unlock everything in one go, don’t despair! You get to keep all your unlocks when you start a new game plus, so you can finish your collection on your second run! 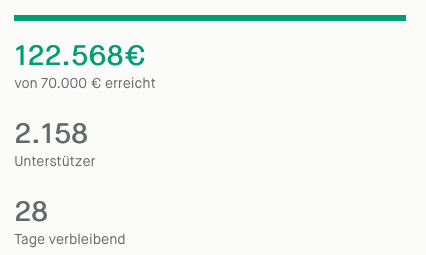 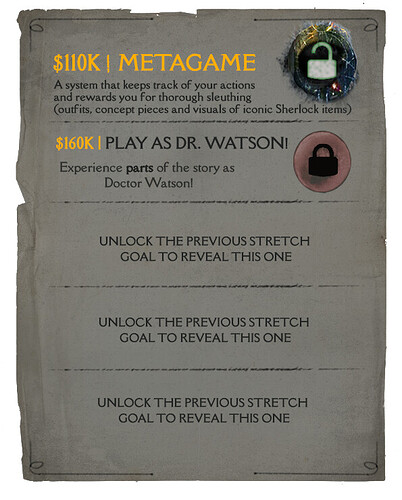 Gee, you are moving fast! Now, our second stretch goal will let you play as Doctor John Watson in certain moments of the story! You will have full VO, will be able to talk to other characters and help Sherlock investigate crimes.

We are already prototyping this feature, but we might not have enough resources to fully implement it in the game. If you want this to happen, let’s reach $160K! 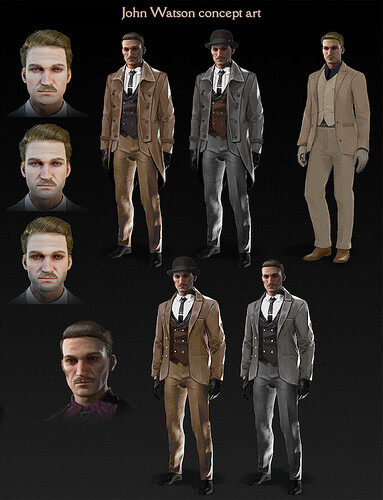 Meet our hero, the not-yet world-famous Sherlock Holmes (also, our Discord server is up!)

Our Kickstarter campaign is now in full swing - and blowing away all of our expectations. Thank you (yes you!), for all of your support, kind words, and pledges. When we started our Kickstarter campaign, we had a bit of an idea of what we can expect. But we certainly didn’t expect this. This is wild. So thank you for playing a part in bringing our game to life. Today we wanted to give you a bit of info on our main character, Sherlock Holmes. After all, since we’ll be stepping into his shoes, we might as well get to know him a little better. 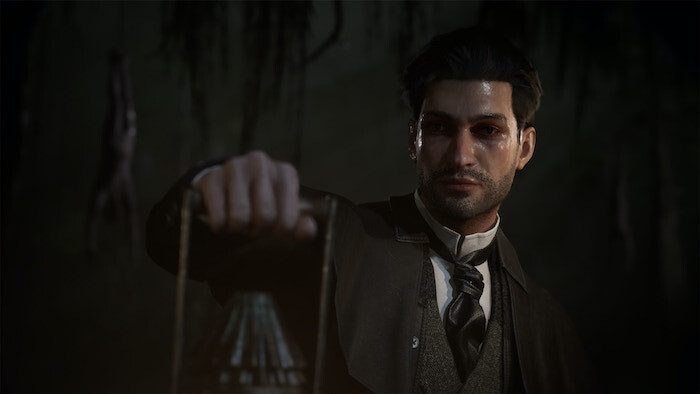 The story of The Awakened takes place a few years after the events in Sherlock Holmes Chapter One. Our Sherlock is still unknown, far away from the fame that he will have in his later years. Living in London together with his relatively new roommate, and somewhat of a friend John Watson (although the concept of “friendship” is still a bit foreign to him), Sherlock is starting to dip his toes into being a detective. He is known around the neighbourhood as the “go-to” man if you’re missing something, but it is still all local fame. He hasn’t got a big, juicy case yet… But this is all about to change… 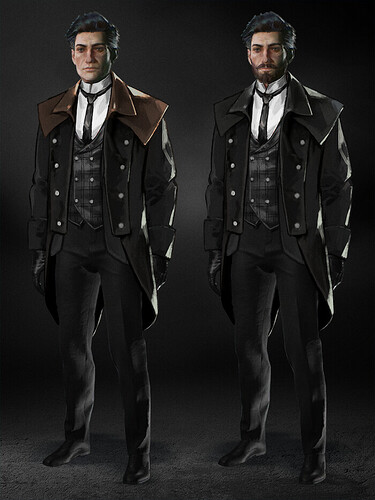 The Sherlock from The Awakened is a young 25-year-old confident man who has an undeniable air of genius around him. No matter where he walks in, he is the smartest person in that room. If unoccupied, his mind rushes with thoughts that sometimes open old wounds. To stop that from happening, Sherlock keeps it busy. He hates boredom. Our Sherlock is a free spirit that doesn’t shy away from eccentricity or theatrics. And most importantly, he believes that everything can be rationally explained. The most mysterious thing only seems mysterious because we know little about it. But everything becomes evident when you take a closer look. Everything can be explained. He trusts his mind’s judgement. But when his mind played tricks on him in the past, a bit of paranoia crept in ever since. 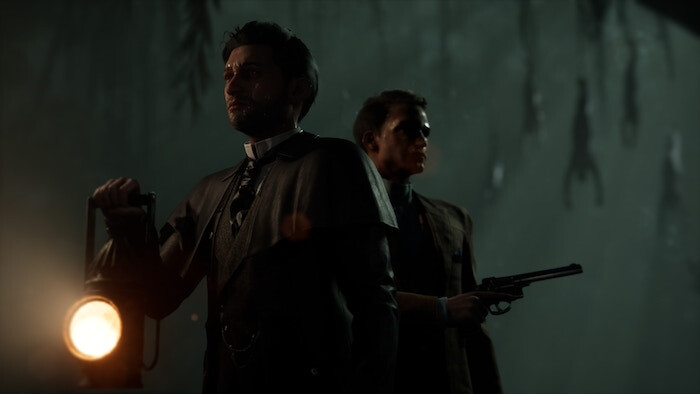 As with each story that we make, we want our characters to grow by the time the credits roll. The Sherlock that you will meet in the beginning will be a different man by the time the case is solved. What will his transition be like? Well, that is for you to experience yourself.

Thanks for spending that little bit of time with us. We hope that you like the sound of our Sherlock. And once again, thank you for all your support so far. There is still time before the campaign ends, so if you would like to make a pledge or if you would like to upgrade the pledge you’ve already made, you can do so right now. We will be back real soon with more info about Sherlock Holmes The Awakened, so stay tuned to your inbox! And as always, if you have any questions, just ask away.

Discuss games, chat with fellow community members, meet new people, and get exclusive inside info straight from us.

Drop by and get in touch with other players and our team: 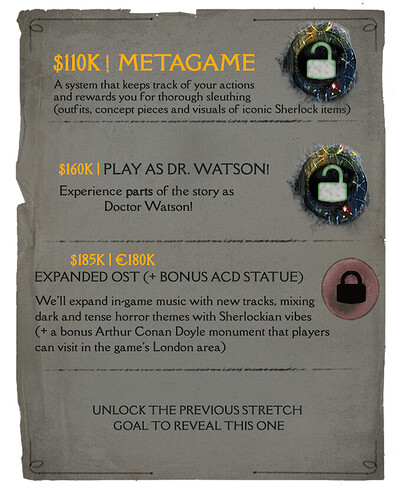 In horror games, music makes up half of the atmosphere, and we would like to use this opportunity to significantly expand our in-game soundtrack and throw in more tracks mixing otherworldly Lovecraftian themes with Sherlockian vibes. 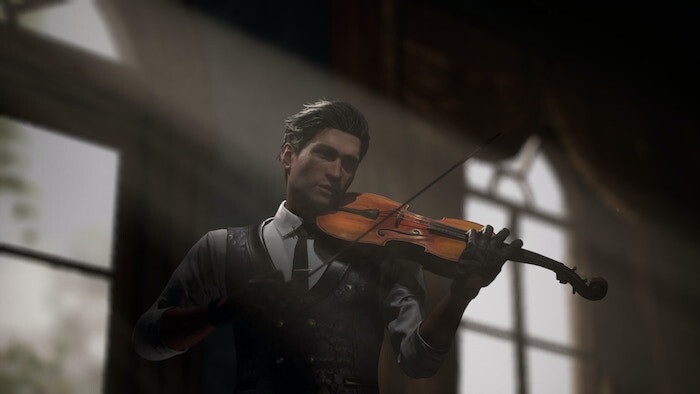 And as a bonus and a token of appreciation, we will erect a monument to Arthur Conan Doyle in the game’s London area. You’ll be able to walk up to the statue and interact with it. We think ACD deserves his own memorial site.

Once again, thank you kindly for all your support - we are thrilled to see the project doing so well! 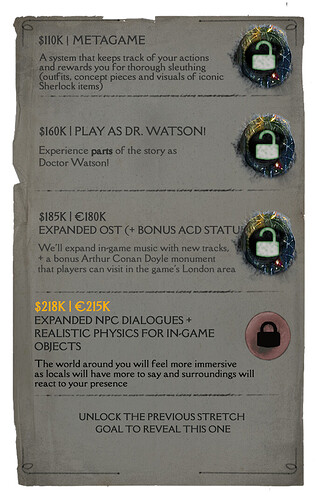 Now that our third stretch goal is funded, we are happy to reveal our next objective! It’s a two in one package deal that includes:

Expanded NPC dialogues. This one was actually proposed by one of our backers, Michael Douglas Kirby. Michael suggested expanding NPC dialogues for repeated interactions, and we thought it was a great idea. We’ll record more lines so that NPCs will deliver a deeper narration about the world that surrounds the player. 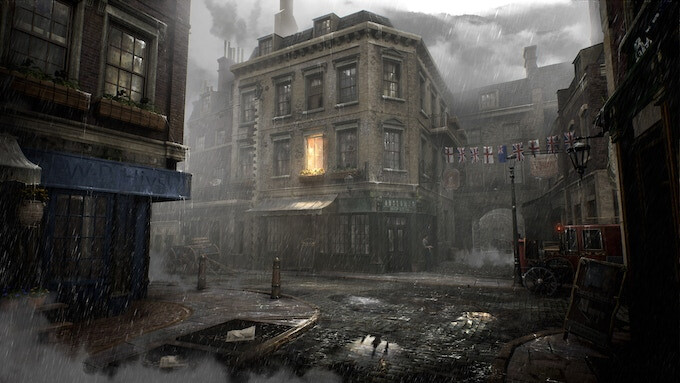 Realistic physics for in-game objects. This is something our tech artists have been testing recently - now objects like chairs, tables, boxes, trash cans etc will properly react when collided with Sherlock. Tables will rock and fall, and if there are bottles on these tables, they will tip and fall as well, watermelons will roll over the floor as you bump them and so on. This should help improve immersion and make for a fun experience.

Btw, we are now at 260% of our initial goal. That’s utterly amazing. Thank you all so, so much!

Thanks to our backers, we have been able to fund all the additional feature ideas our team had floating around for the game. Ideas we had knowing full well our available resources, abilities and in view of our current situation. A situation that is changing almost every day. We have a plan of everything that will go into the game so now, all additional support you give us will be allocated to the team to strengthen our safety net and to further secure the future of our studio.

Once again, thank you all for your support and your uplifting messages. Probably the best part of this experience is we can now truly put names to so many people who have been with us for many years.

We will continue to make games because it is our way of resisting and carrying on with our lives as best as we can. The safety of the team will always remain our priority, but our dedication to our fans who joined us here is right after that.

You guys are amazing, see you soon.

PS If there was a feature you wanted to see in the game, do not despair! Hop onto our Discord channel and share your thoughts with us and the amazing community that we have. After all, if there’s a great idea - one that can be implemented without derailing the project - we won’t say no to it.

This is it. These are the final moments of our crowdfunding campaign. In a little less than 8 hours, this campaign will be over and part of Kickstarter history.

If you were thinking of making a pledge or upgrading it, now is the time. There are less than 8 hours left. We have some Kickstarter exclusives that once they are gone, they are gone forever! So if you would like to get Sherlock Holmes The Awakened at a better price and have your name in the credits, now is the time to do it too.

We also can share with you some brand new Sherlock Holmes The Awakened screenshots. They’ve been made just this week. And finally, now that we know more about how our crowdfunding campaign has done, we can give a more precise release window. We are aiming to release The Awakened in February 2023.

It’s time to make history everyone. 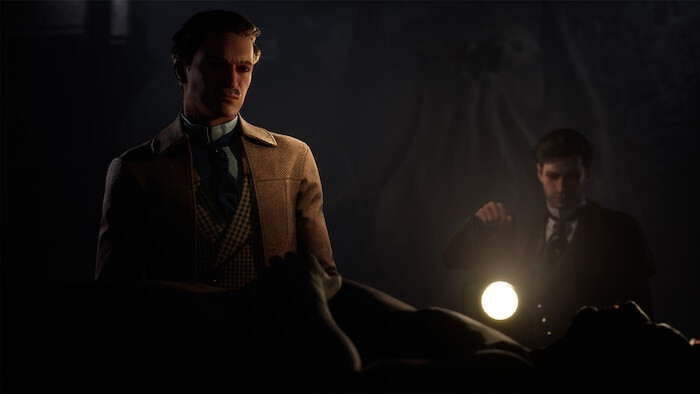 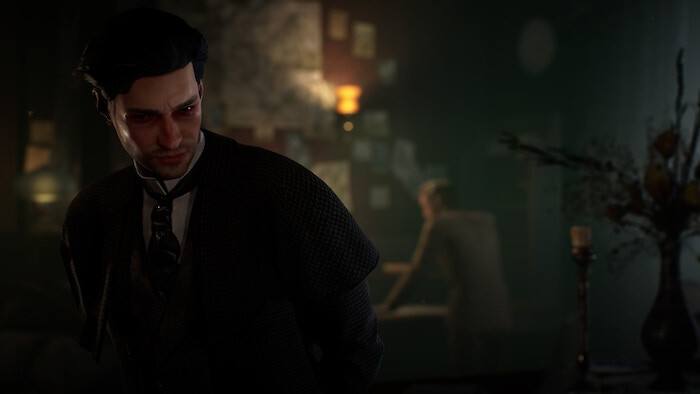 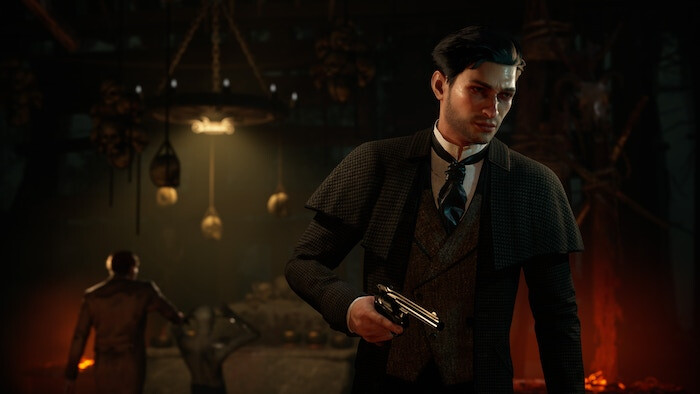 Our Sherlock Holmes The Awakened Kickstarter campaign has come to an end. What a fantastic journey it was! We are blown away that together with your help we could achieve not only our goal but even more, way more. And we did all that in 30 days too! What a month. 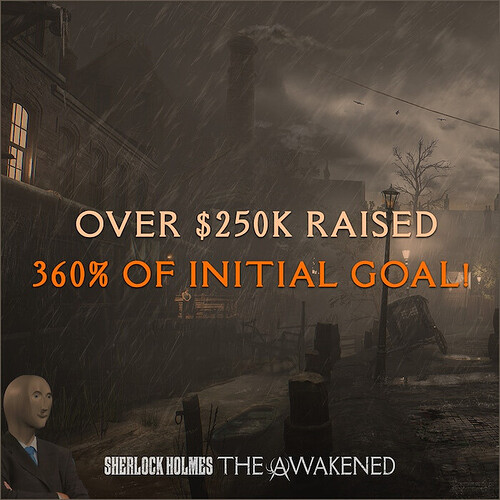 We want to thank everyone from the bottom of our hearts who backed our project. With your help, we can bring our project with additional features and we can feel more secure while this “situation” in our country resolves. With your support, we’ll be able to release Sherlock Holmes The Awakened in the way we wanted. We can now fully focus on the production process without having to worry about the financial aspect. It’s one less “thing” that no longer occupies our minds. So thank you all. It really means the world to us.

Don’t worry though, it’s not the end of this journey, it’s just the beginning. We will send out reward surveys soon to all of you that backed us (please keep an eye out for those!). We will also keep you in the loop on how Sherlock Holmes The Awakened is progressing. There will be gameplay that we’ll like to show, trailers, screenshots, maybe AMA’s (would you like us to do an AMA with you?), and loads, loads more. The way we see it, this adventure has only just begun! So come on detectives, we have a game to make and later on to play!

Thank you and speak to you soon,